In 1934 the MacRobertson Air Race proclaimed itself as the greatest international air race devised, and history has confirmed that bold claim. The aircrews that completed the journey from England to Australia were honoured in a parade in Melbourne and treated like modern day rockstars.

However, along the way, the KLM DC-2 airliner Uiver became lost in a thunderstorm on the final leg of the race and was forced to land on Albury Racecourse at night.

The remarkable story of the rescue of the Uiver by the townsfolk of Albury, and it still taking the handicap prize in the race, is the stuff of legend. It is one of those events which could not be more amazing if it were scripted.

At Albury, where the Uiver was saved, the community honours this incredible story by restoring the world’s oldest Douglas DC-2 aircraft, with the aim of making it a museum centrepiece for future generations.

Everybody’s Oma follows in the NSW Central Coast family’s footsteps as they navigate Oma’s failing health under the spotlight of an enthusiastic audience of well-meaning strangers. Jason van Genderen premiered My Town is Broken at Read more…

On 26 February, a ML-KNIL Douglas Dakota caught fire and crashed into the ocean about 23 minutes into a test flight from Archerfield, killing all six people – three Dutch servicemen and three Australian crew Read more… 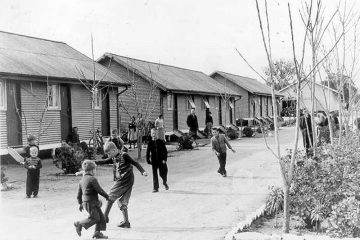 Around 170,000 displaced persons came to Australia immediately after World War II. Nearly half lived at Bonegilla when they arrived in Australia. Some stayed for weeks, others for months. Migrants at the centre were taught English and learnt Read more…